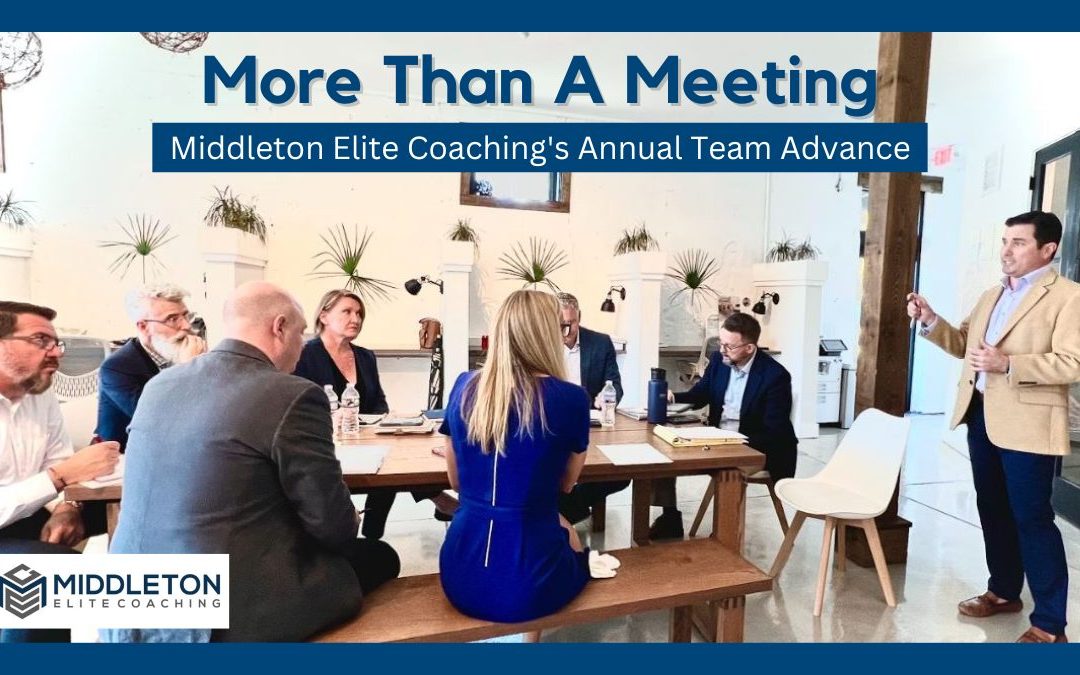 Affectionately referred to as our Team Advance rather than a team retreat, this annual event is a time for us to engage in team building. It is a time to exchange information and partake in activities that will increase our workplace performance. Above all, it is a time for us to hold meaningful conversations and check in with each other on goals and progress.

Extensive planning aside, our annual Team Advance is a powerful mix of fun and masterminding.

As leaders, Debbie and I love the opportunity to harness the collective brainpower of our insanely smart team, and it’s icing on the cake when we can do this together and in person. Our 2022 Team Advance was just that, and more.

RELATED: We covered how to host a successful Team Advance in a fun video, which you can view here. 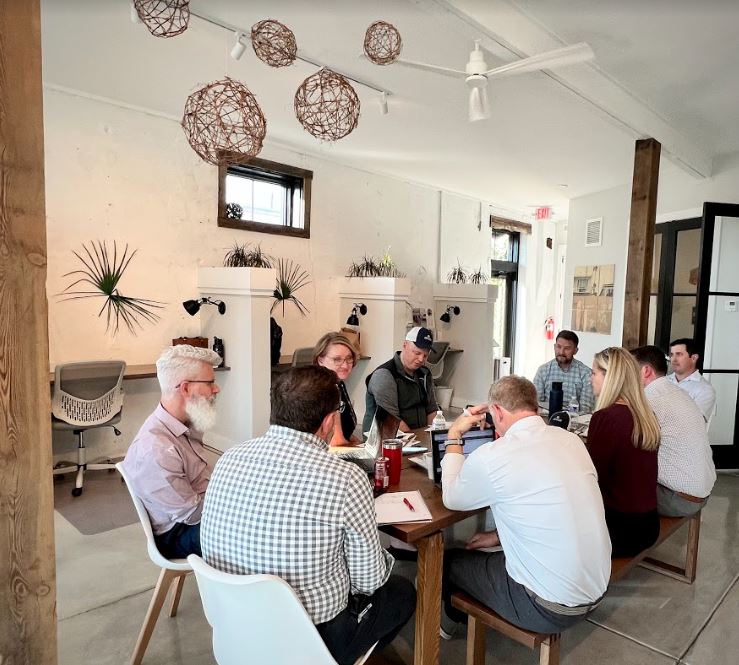 Figuratively and quite literally, we began our beautiful October weekend by setting the table. Our team arrived with the weekend’s agenda in hand, ready and excited to dive in. 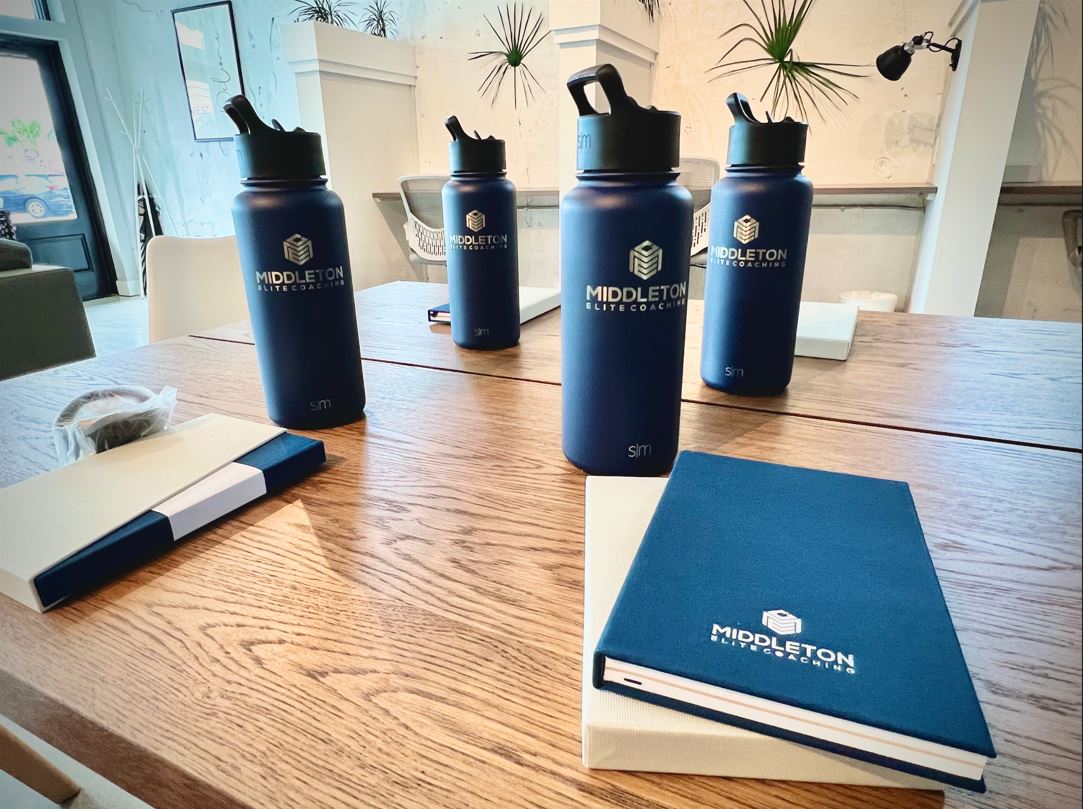 After exchanging genuine, enthusiastic hugs and a few comments about facial hair progress since the last time we were together, our team settled in for what would surely be a weekend of learning and discovery – but not before grabbing this amazing selfie (thanks, Zack!)

We commenced by discussing the current state of the market and how it could impact our business, mostly positively. We discussed how important and rewarding the work we do as coaches is for our clients. Each of our team members was given the opportunity to speak about how they view success; whether market-related or otherwise.

It was a beautiful setting of expectations and road mapping for what the weekend spent together would bring to all. 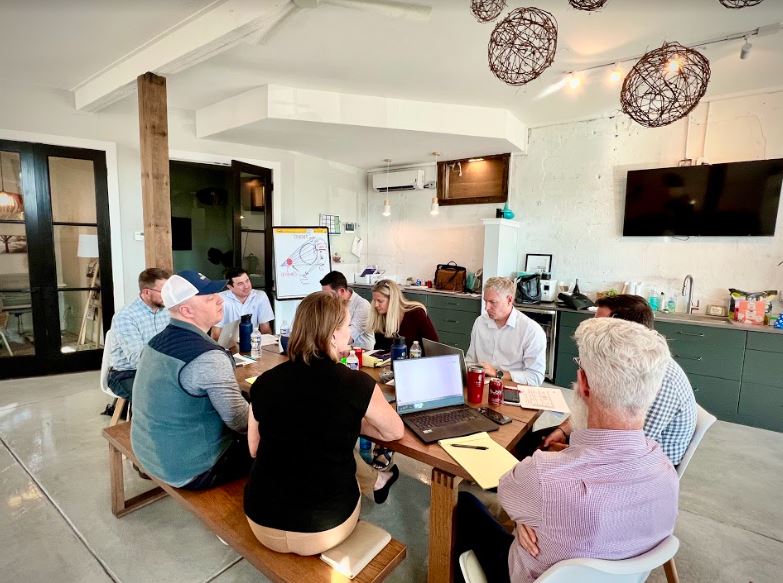 I recently attended a multi-day event led by renowned entrepreneur and author, Keith J Cunningham. With Keith’s permission to share, I led spirited exercises for strategic growth and continued collaboration within our team. This was a highlight for me in having the ability to share these inspirational exercises with everyone at the table. 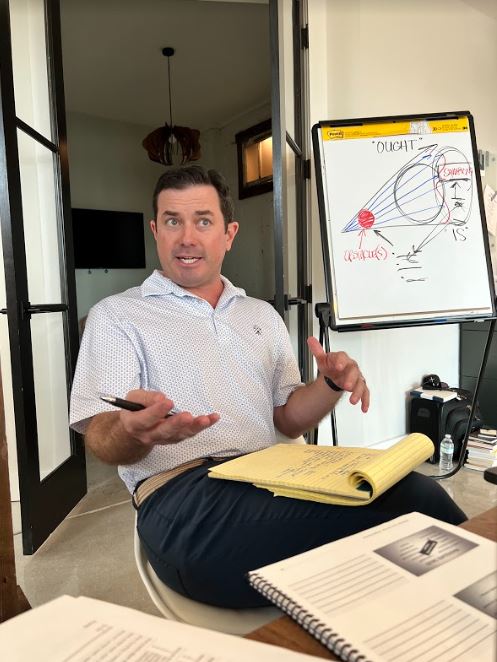 “It was a terrific collaboration of unique perspectives, focusing on singular challenges.”

Our time together as a team is so valuable to us. We seize every opportunity to capture memories; taking photos and collecting video segments from our team for upcoming content, as well as for the benefit of our clients. This year we had a little fun with them, too!

Here is what we learned about each of Middleton Elite Coaching’s real estate and business coaches. Did you know that our team is comprised of talented whistlers? More importantly, did you know that you should never fry bacon naked? Yes, we said it… and it’s all right here. 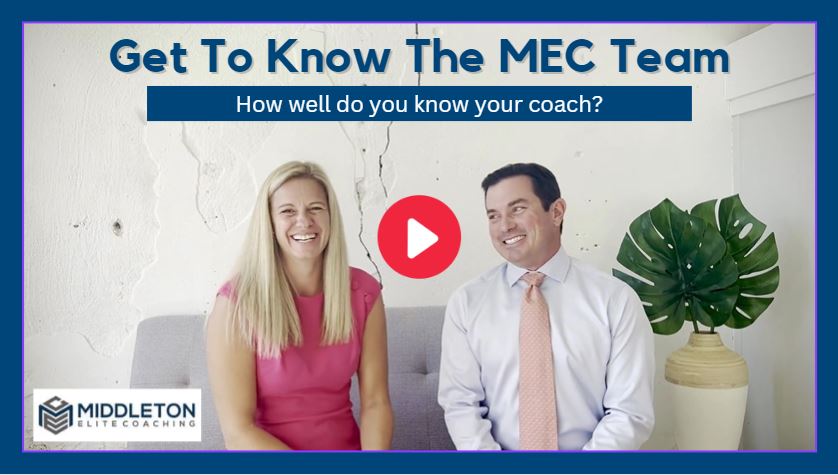 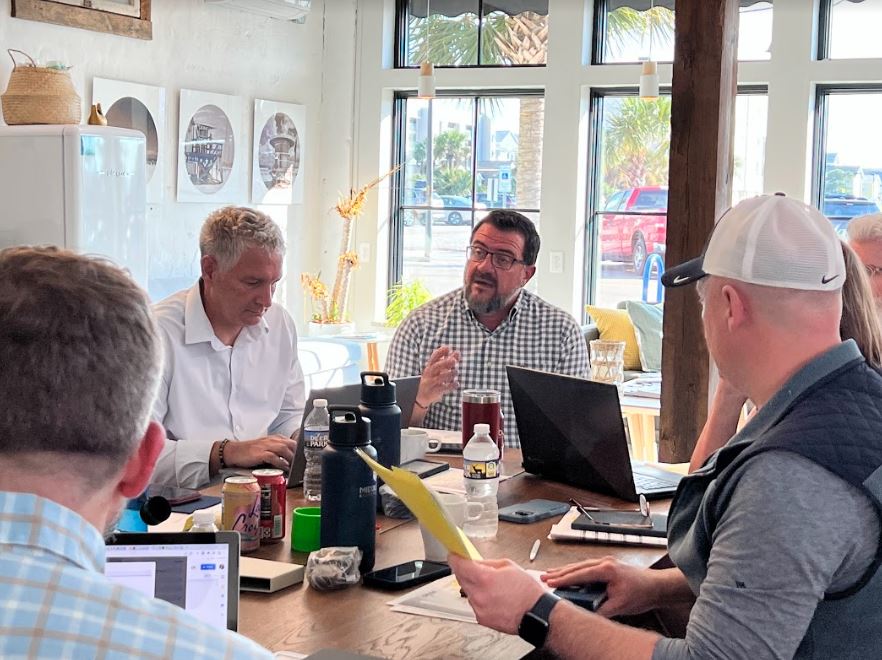 “Our Team Advance keeps getting better every year!  The quality of conversations from coaches that truly care about the personal and professional successes of our clients makes me proud to be affiliated with this team!”

At the conclusion of each working session, our team was ready to have a little fun and light-hearted conversation over dinner. Together we sat, all 10 team members at the dinner table, and led one great conversation (which later broke out into several small group conversations) about life, family, hobbies, and all of the personal things that did not involve growth-minded goal-setting – though we’re sure a few conversations went there anyway.  There are few things in life that beat good food and great conversation.

“This year’s MEC Team Advance came with a true milestone! We celebrated five years of successfully impacting the businesses of some of the best in the real estate industry. Understanding five years isn’t our finish line, we spent hours masterminding the obstacles our clients face in the market, creating exercises to help our clients grow as leaders, and evaluating the challenges top agents face outside of market conditions to achieve their desired level of success. Putting work aside, we had tons of fun recharging, “reloading,” and creating memories. Onward!!”

Day 2 of our Team Advance was a full day of thought-provoking idea-sharing, and gaining clarity on the future. We shared the organization’s growth over the past 5 years, the current growth cycle we are experiencing, and what we see as the future trajectory for Middleton Elite Coaching.

As cool as it is, a brainstorming session of this magnitude made us all hungry, so we brought in lunch and watched the author of The Happiness Advantage, Shawn Achor deliver a TED talk by the same name. 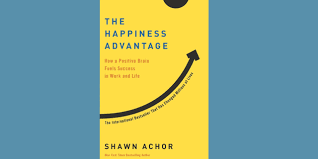 Inspired by the TED talk we had just enjoyed, our team completed an exercise related to our own individual happiness. We shared what makes us happy and why, and plugged into what an advantage having happiness truly is. We discussed how we as leaders and coaches can bring this to the forefront for our clients.

Debbie and I gifted our team with the book; a gesture that was appreciated by all.

Our team is grateful for the last 5 years and excited for the next 5 years to come. 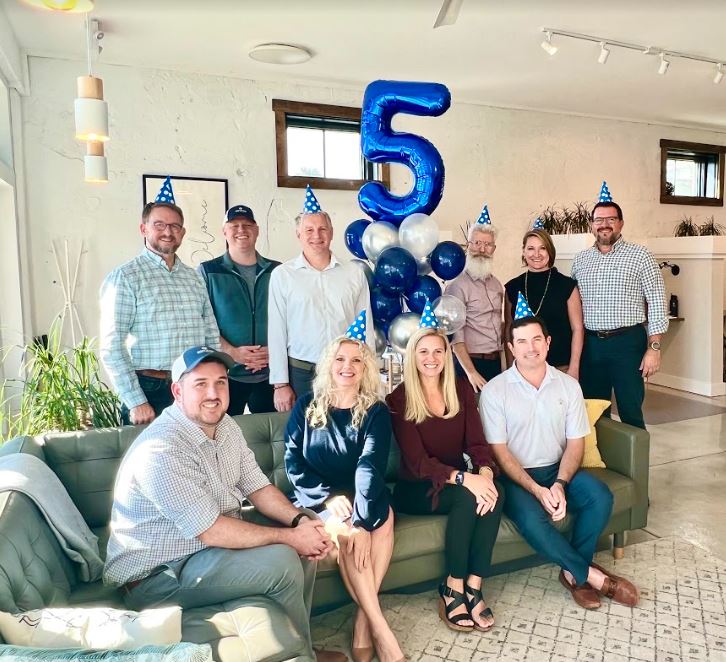 We often feel gratitude toward one another and our clients even if the opportunity to show it isn’t presented as often. We intentionally devoted a portion of Day 2 to handwriting notes of gratitude to our clients and to each other. This exercise was our favorite of the day.

“I always enjoy our Team Advance. It’s hard to describe the impact that can be made when you put a bunch of smart (and funny) people together for a weekend. We covered everything from the impending effects of persistent inflation to helping our clients create stronger strategies for next year, to how to be the last person standing in laser tag. Debbie and I are fortunate to be in business with such a dynamic and diverse group of people.”

Our operations team is a powerhouse. This team not only supports our clients, but they also support our coaches, our leadership, and all of the content we create. They keep us in demand and on time, all the time. It was important to me and Debbie that MEC’s operations team had an opportunity to share recent additions to the systems, tools, and operational processes necessary for keeping us all running.

From client care to lead follow-up and everything in between, the operations and leadership teams delivered a detailed account of the processes we employ from the moment a lead comes in, all the way through successfully launching a client into their very own customized coaching program. To make things even better, they made us laugh in the process. Watch at your own risk. 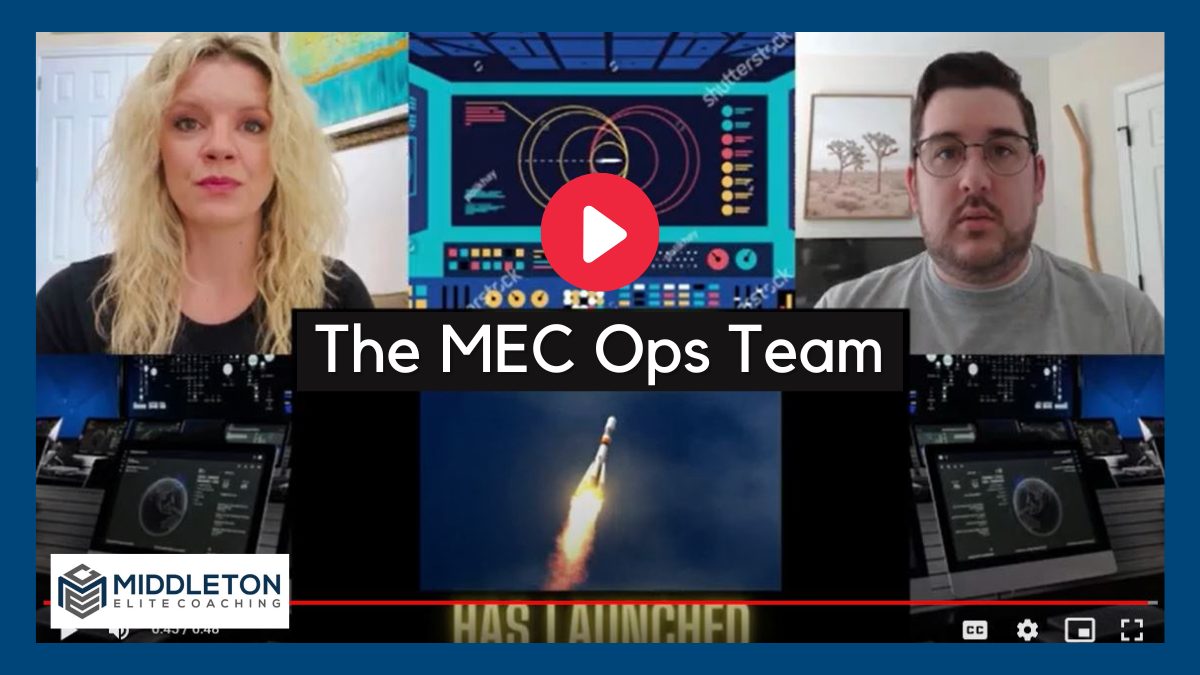 “What I loved about this year’s team advance was the absolute world-class ideas and mindset about what will make our clients and their businesses successful.”

We concluded Day 2 with a delicious dinner and a continuation of funny conversations. One thing’s for sure, our group is not short on words. There was laughter, laughter, and more laughter; then it was time to get competitive.

It’s no secret that Debbie and I are a competitive duo. We take every opportunity to participate in activities that allow one of us to win against the other. An evening of tactical laser tag seemed like the perfect activity.

Suited up in colored headbands with weapons in hand, our team (and some of the more daring spouses) was divided into two groups; red and blue. In an ironic twist of fate, we weren’t allowed to select our own teams, so both Debbie and myself were placed on the red team. The competition was now a united force.

It was at Battle House Wilmington that our team was able to identify the strategizers and take cover from the merciless. We learned that Debbie is relentless in her pursuit of the prize. We learned that our team has more runners than non-runners, and we learned that coach Jim can play a mean game of hide and seek inside a stack of rubber tires. The truest story ever told.

After a hard-fought battle, the Blue Team took it home by 1 point; hardly leaving the leadership team in their dust – though a win is a win. 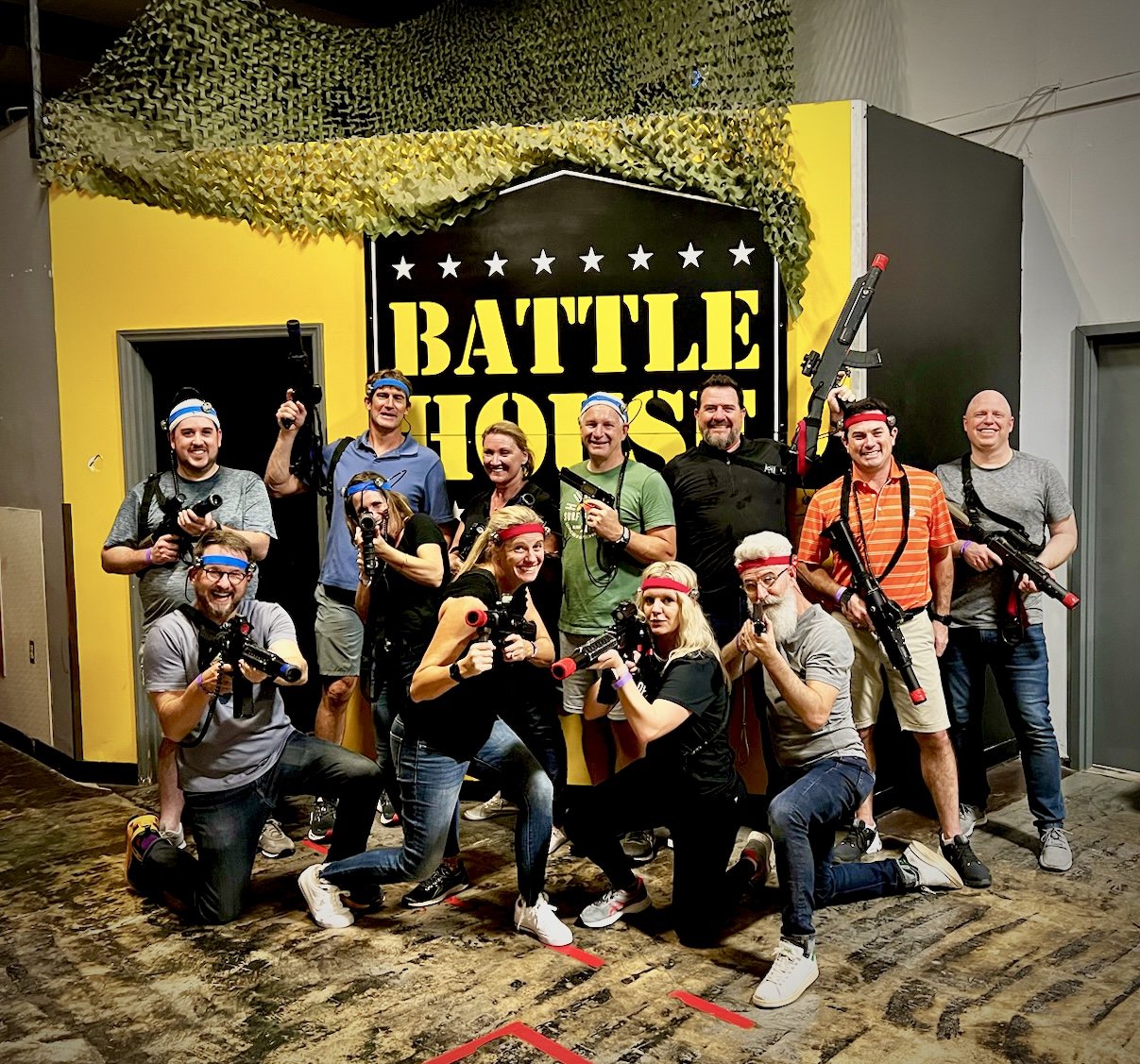 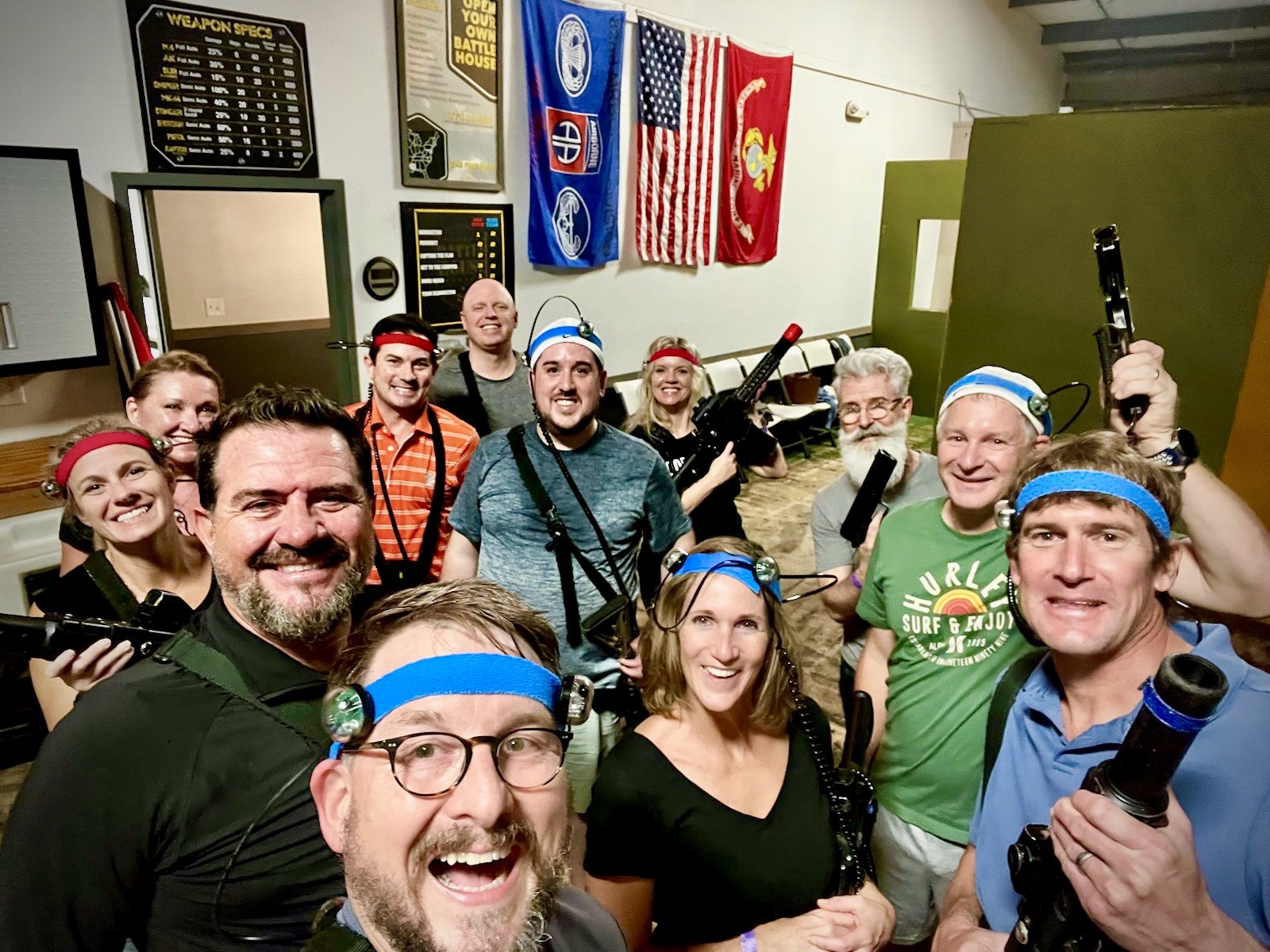 Day 3 – Additional Income Streams and Layers of Our Business

A large part of the vision that both Debbie and I have for Middleton Elite Coaching is that we will continually find new ways to help our team members build wealth. We also strive to identify additional levers for the company that will be beneficial to the clients we serve. On Day 3, we shared this vision with our team.

Of all the areas we’ve grown Middleton Elite Coaching over the past several years, our recruiting services for our clients as well as the coaching we provide to property management companies in building successful sales teams have seen the highest growth in demand.

Our team discussed the many ways that we as a company are creating future opportunities for additional revenue streams, meaning additional sources of income for our team. We discussed alternative sources of cash flow and cash runway; the ways we can maintain control in a changing market.

The majority of Middleton Elite Coaching’s real estate and business coaches are doing the same for their families. Generating alternative sources of income such as investments, flips, and short-term vacation rentals to name a few, our team was excited to share their wealth of experience with each other. 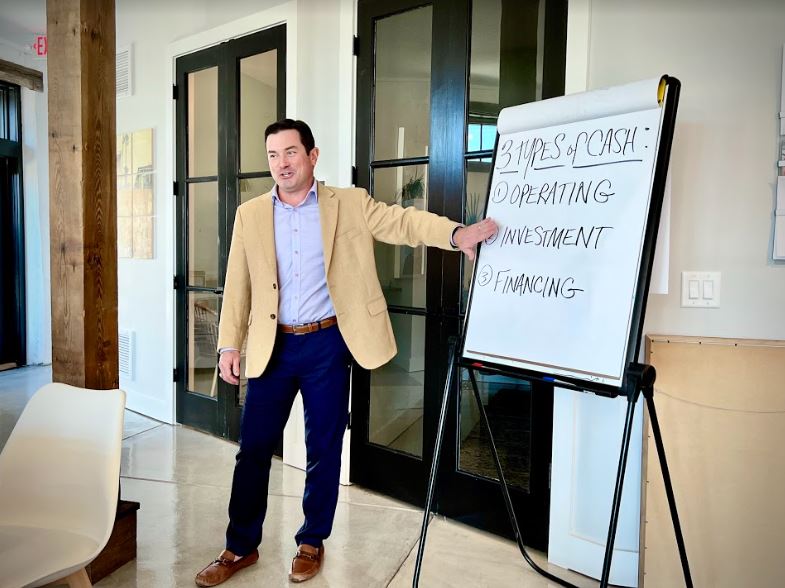 MEC coaches Brian Bursell and Zane Meadors each presented the investment models they are currently using and the unique strategies with which they have found incredible success. These peer-led presentations were immensely enjoyed by the MEC team. 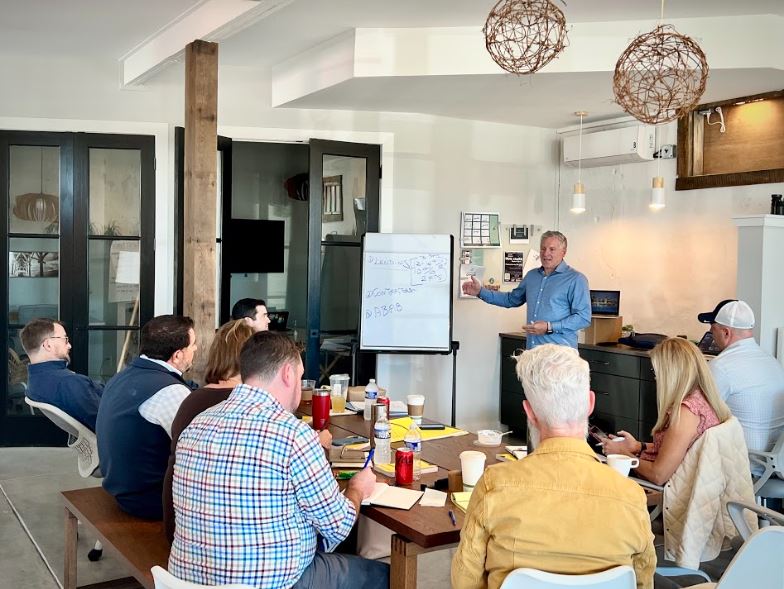 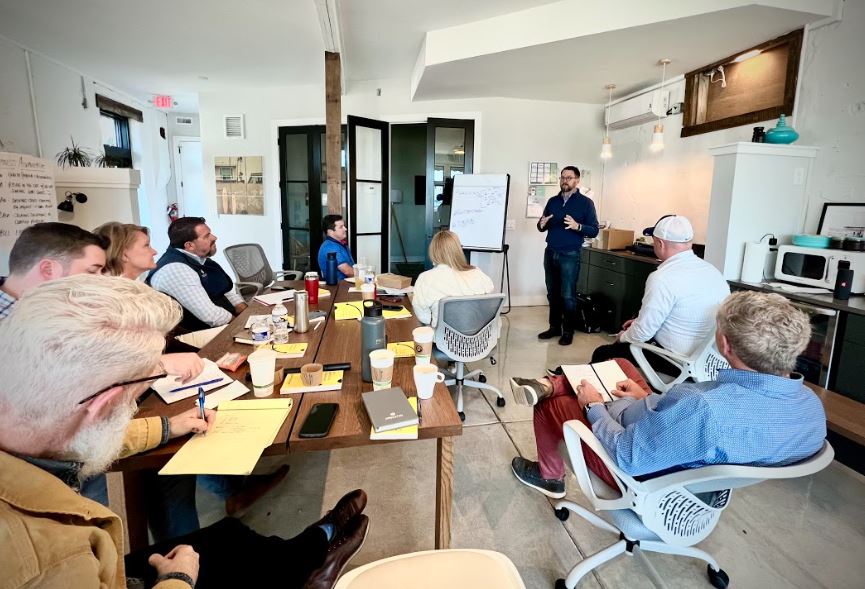 “I felt this was a great opportunity for our entire team to come together and meet.  It has been years since we were all able to be in the same room at the same time.

To that extent, I really enjoyed getting to know the other coaches as well as our support team on a more personal level.

I felt the most impactful segment of the weekend was gaining great perspectives and suggestions from around the team.  It was personally helpful to see how each coach and support staff brings their own skills, talent, and experience to help our clients.”

We learned and we laughed and then we learned some more. This year’s team advance was three days of connection, togetherness, and knowledge sharing that amounted to something that was just good for the soul. We were reminded that ours is a team comprised of intelligent and fun-loving individuals united by a common goal; to make an impact on the businesses and lives of the clients we serve. 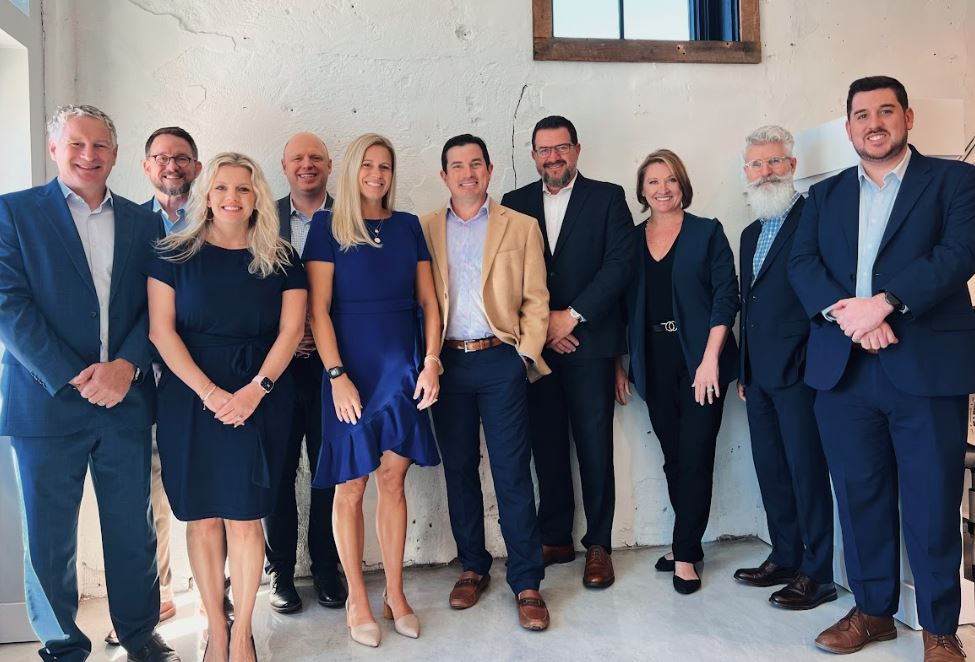 “Super energizing weekend! Watching our team of coaches analyze the real-world challenges of coaching agents and teams to succeed in today’s market, and to offer actionable solutions in real time was amazing.”

Already looking forward to next year!

Bill, Debbie, and The MEC Team 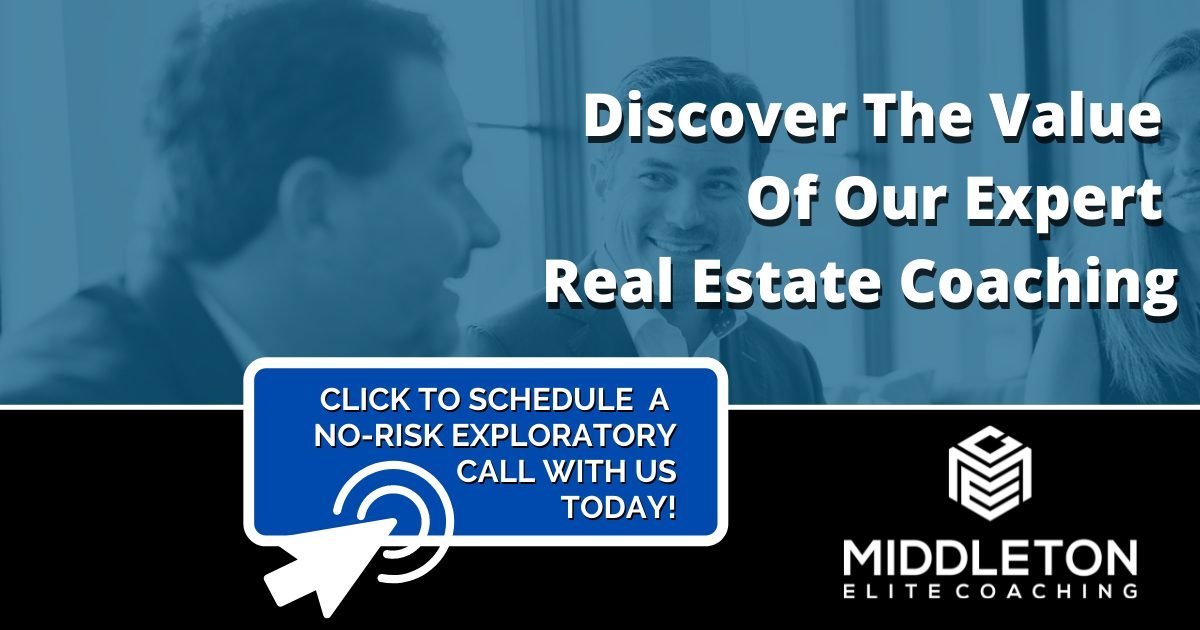 Sign Up To Receive Free Tips, Tools, & Valuable Resources for Your Success

We're constantly helping our clients and teams discover new ways to push through to the next level. If you're not quite ready to commit to 1-on-1 personalized coaching for your business, you CAN step on the right path toward growth with our news and updates. We'll send you periodic resources that you can implement right away for your success. Here we grow!